Parum the dwarf is fighting a losing battle with poverty, and his family is starving. Despite tales of fright, he will fight through the haunted mine, taking down swarms of apparitions on his expedition with naught but the pickaxe at his side. If the tales of riches at the end are real, he and his family can once again enjoy a hearty meal.

Not that the pickaxe should be underestimated; with the right angle you can knock boulders aside, and with enough force you can smack spirits silly with it. Just be ready for challenge, the spirits have no mercy...

About 21 hours total development time. All art, sounds, programming, and other assets (except the font) are original and made for this project. The source code is available under downloads as well.

!!! IMPORTANT NOTE: This game can get rather difficult! Click the picture below for a YouTube video walkthrough if you need help or just want to see the rest of the game: 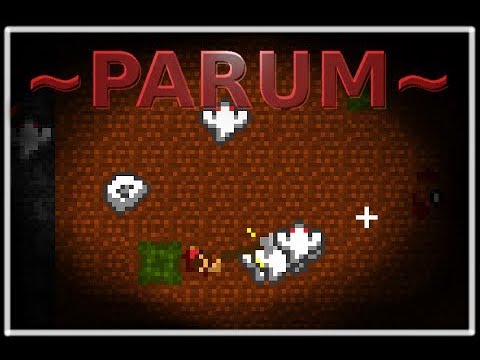 With this being my first game jam, things could have gone a lot worse.

The biggest mistake I made above all others was deciding to join in the game jam just one week before it started. I missed over 10 of the 48 hours just working my day job because I could not request those days off. I was also quite sleep deprived by the time I submitted the game, as I had to work the morning of submission and still hadn't quite got an entire level made. I ended up staying up all night, determined to at least make sure there was an end goal and ending screen.

Besides the big mistake of not taking off work though, there was also another glaring problem that taught me a lot. The difficulty. Or at least, the mechanical balance. Spawners keep making ghosts, and never stop. You can't escape from them. Even when they are way off the screen, they keep sending ghosts at you. The boss is very hard and several people reached him but only a select few could finish the game. I didn't realize this because I knew the code, and what to do and how to counter each enemy, so when testing I didn't even notice the problem; In fact I could beat it pretty easily. But make no joke, this is practically a last level in a proper length game once the difficulty kicks in. I'm convinced that if I had allocated more time on balance and had someone playtest for me before submission, I could have made the game a lot more fun to play for everybody.

There were some smaller things learned. In retrospect, I'm really glad I went with the simple graphical style as I'm not a natural artist and it takes me a long time to make anything decent. Next time working with a graphics artist would be wonderful. I also learned that I'm capable of making a decent piece of music in less than two hours (usually it takes me days, and I still don't like what I've made!). I also learned that GM Studio's room editor is ungodly slow when there's hundreds of objects in a layer.

All in all, gm(48) was a great experience! I learned a lot, and loved playing everybody's games.

Spelunking through a haunted mine? Beats starvation... Can you lead Parum and his trusty pickaxe to the riches at the end?