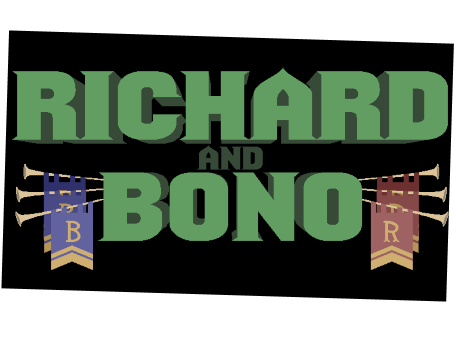 Richard & Bono is a game about two adventurers, Richard and Bono, traversing a perilous dungeon.

Bono is the squire to the great yet meatheaded knight Richard, who has decided to take his protege on a quest to save a princess. Or maybe to find some mysterious artifact, or even treasure!

Not that it matters.

You see, Richard has a tendency to stumble into life threatening situations, and today is no different. Bono must protect him by any means necessary, lest he lose his one chance at knighthood.

Take control of Bono and help him throw levers, press buttons and turn off fire traps to clear a path for Richard, all the while evading goblins and leaping over chasms.

It's been around a week since the final deadline of the 28th GM48, where @darkochmarko, @varboska and I managed to somehow squeeze the whole development of Richard and Bono into 48h.

I wanna start this off by saying that we all had a great time and we're pretty satisfied with the final product. Richard and Bono has many shortcomings, like being too short or too difficult for a lot of players, but we're still happy with how it turned out and all feel pretty much like it's a finished game, or at least a very good vertical slice.

So instead of going over what went right and what went wrong, I'd like to run through some key takeaways we've had from this jam.

Seriously, I cannot stress this enough. It's been a week and I'm still feeling the damage I've caused myself by not sleeping enough, eating improperly and sitting for pretty much 48 hours straight.

I know that 48 hours is a very short amount of time and trying something new when working on a game for a jam can be extremely risky, but I've also experienced first-hand how rewarding it can be.

Richard and Bono marks the first time I've tried to implement something like an ECS in Game Maker, and it went surprisingly well! Setting up the system at first took a fair amount of time, but it made things so much easier down the line! For example, making an object flammable only took a single line of code in it's create event.

If you wanna know more about how I went about implementing that, feel free to hit me up on twitter or something.

The time pressure can be very stressful, but don't forget what you're doing and why you're doing it. Making games is your hobby, and it's supposed to be fun!

Anyway, I'm running out of characters so I'm gonna wrap this up now. Thanks for reading, and make sure to play and rate Richard and Bono if you didn't already!

Take control of Bono, the squire to the great knight Richard, and help the pair navigate the goblin infested dungeon!