It's a lonely road out there in space, but that don' mean a self-respecting space cowboy's lookin' to get all buddy-buddy with the local ruffians.

Take the fight against these ne'er-do-well bandits, slimes, and fish-with-legs on their own tiny turf! When you can walk around a planet in only a few seconds, it makes for a great circular shooting range. You know what they say: What's radial is what's radical!

Navigate the menus with the mouse, use A/D to move, space to jump, and click to shoot.

This is my first gm48, I'm reasonably happy with how it turned out! 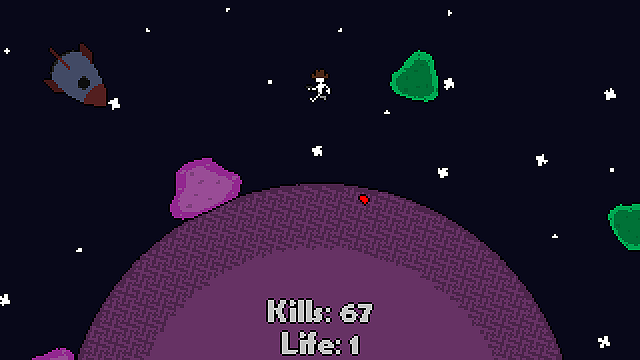 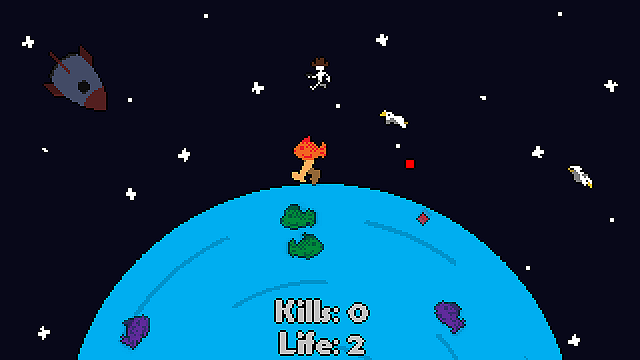 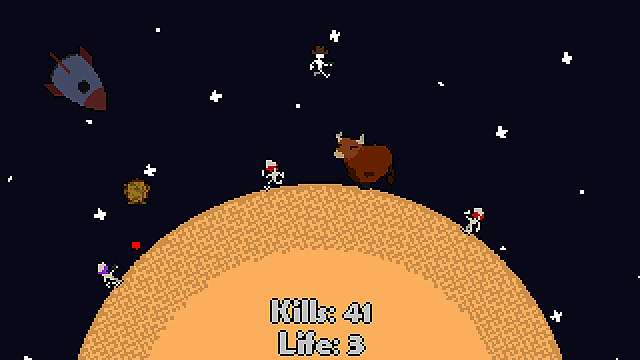 This was my first GM48 (though, not my first jam by any means), and I had a blast working on it! Development had a few ups and downs, but I ultimately ended up with a product I am very proud of.

When it came to the theme of "Small World", I was actually rather disappointed with how limiting it is as a theme, and was unsure of what to do for a long time. Still, there are a few very obvious base ideas that came to mind immediately, of which I eventually selected "game where you walk around a small planet" when I thought of some cool methods of presenting (and programming) it, figuring an arcade shooter in that style would be cool.

I've gotten a lot of compliments on the smooth menu transitions - they were among the first ideas I visualized and documented when I was initially developing the concept, and a big part of why I got so excited about making this game. Since the actual gameplay would end up being contained within this menu system, I actually got to making these transitions before anything else in the game; that way I can just make a state machine for the whole thing and slot the actual game into its place later. Most of the first night was actually spent on this, and in the end it was definitely worth it; working on a game with polished menus is way more encouraging, and if I pushed them later into the jam they would probably end up getting rushed.

In terms of making the actual game part, one of my proudest achievements is actually the player sprite and animations. The small pixel scale and large hat left me with very little space to communicate all the information necessary for the body. I spent probably an hour tweaking this sprite the first night, and I barely squeezed a really strong, striking pose into that handful of pixels and 4 different frames.

By the end of Friday night, I had the menu transitions and player sprite/movement implemented. Saturday began the implementation of enemies and systems, and was probably the hardest day of the jam. I had only mostly finished the enemies of the Bandit Planet by evening, and I had gotten so fried that I was somehow forgetting how to implement a wave-based spawning system. The game had no sound, tons of programmer art, and not even a finished level, and I was starting to feel very dejected. I actually considered dropping out of the jam altogether.

Let this be a lesson: ALWAYS PERSEVERE. I decided to work extra hard for the rest of the night before deciding whether to quit or not, and the game rapidly transformed from a depressingly incomplete demo into something fun and exciting. I implemented the wave based system as simply as possible, and I rapidfire banged out some tunes and sound effects. Let this be another lesson that you should always develop sounds/music alongside the rest of the game, it feels way better to have them in than to work on a silent project! Reinvigorated, I decided to keep on trucking to Sunday.

On the final day, I had to create the next levels and touch up much of the art. The Slime Planet ended up being far simpler to implement, and the Water planet was largely copy-pasted from the Bandit Planet's functionality. I decided on the title "The Final Frontiersman" since the player plays as a cowboy (frontiersman) in space (the final frontier)! Making the title art was one of the more fun things to do, as I designed it around the vibe of schlocky black-and-white movie titles.

In the end, the game was very successful, and received a ton of glowing feedback! Still, there were some criticisms, and some quality of life changes or other content I had to cut for time. But I truly love the game I made, and I'm very glad people are enjoying it - so much so that I'm currently planning to create a Deluxe Edition to flesh out the gameplay and the vision as much as I can (Follow me on twitter for updates huehue the link is on my profile page) I really am grateful to the GM community for giving me this opportunity, providing such great feedback, and, of course, playing my game!

Bandits? Slimes? Fish with and without legs? They're all up to no good. This cowboy's looking for a space shootout!