There are sound effects and music, make sure to turn your volume up!

Take control of individual wyrm viruses over 13 levels, as they gradually warp the host's succumbed body and mind in this abstract entry. Despite what the description may suggest, the gameplay itself is fairly straightforward.

You must strike a balance between going in to use your toxic trail and using your eyeballs to corrupt from a distance, as it's easy to get overwhelmed; the host's cells, in addition to sheer quantity, will use green acid, white anti-bacterial ooze, and outright physical force, to destroy your wyrm.

New enemies, bosses and mechanics are frequently introduced throughout, and your level completion progress is saved between sessions as well. You're free to replay any level while within the main menu. 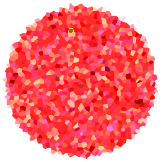 Red Bloodcells are defenseless (ram them or poison them), and drop O2, which heals you and ever-so-slightly upgrades stats, very important to keep in mind! If it's not a Red Bloodcell, avoid contact!

Anyways, have fun! I hope you'll give the game a chance, can you make it through all 13 levels? There's a tutorial which gives instructions in the menu if you have any trouble.

This is the first game-jam where I feel as though I truly "finished" the entry, there's music, a fair amount of content and progression, sounds, decent art, a vague story, etc, at least as far as something I'm looking at as being made in 48 hours, I'm very happy with this entry. I went with something where some of the audio and visual oddities are in-fact deliberate; I think it sets an interesting mood, not to mention of course that it makes certain things easier.

Take control of a parasitic wyrm over the course of 13 levels in this surreal, experimental entry.