ABOUT PRESIDENCY
You're running for office, and the last week before election day, you realize you don't know anything about politics! Game includes: procedural generated questions; opponents and more! 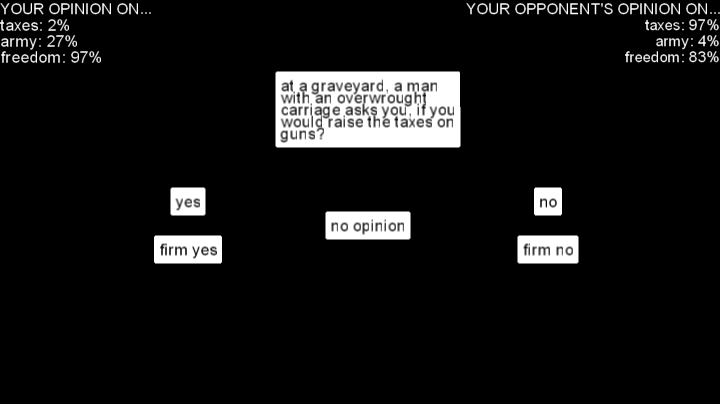 CONTROLS
Use your mouse to navigate the questions.

HOW TO PLAY
if you you don't wanna read this, I'm sure you'll have fun anyway.
A word salad of a question appears in front of you. You know your opinion on the subjects, but if you want to win, you gotta make a sacrifice for the voters. This means, through trial and error finding your party's ideals for:

(tip: use your opponent, who actually knows a little about politics (but is still trying to figure his own opinions out) to your advantage - remember he's on the opposite side of the political spectrum!) You'll also get visual feedback about your voters ideals, now you just gotta remember that for the next time a similar question comes up. You have to check the polls every 3 rounds, and that's when a day passes.

You're running for office, and the last week before election day, you realize you don't know anything about politics!