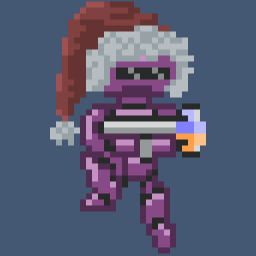 Stuck in the Purgatory, man tries to brake his vicious cycle to see his beloved one, once again.

Nasty Suses ate all the Puppes, and only one survived. Help the final Puppe find his friends, make a party and EAT TO THE BEAT!

Two alignments, Arthurs and Merlins, continue decade long fight against each others. Choose your side and join in the kicking!

You are an I.C.E agent and your mission is to destroy malfunctioning cores in their system. Time and resources are limited, so one must act fast in order to bring down the system safely.

Dweller of the Depths

Descent down the mining shaft...

EPILEPSY WARNING! SEIZURE WARNING! You, "Ruthless Rudi", have encountered your biggest challenge yet: The Creator of the Universe! Fly through the space to meet your toughest fight. There's no greater challenge for such a great space ranger than "Ruthless Rudi"! This fight will leave your mark to Great Book of History!

Exploration of space drove humanity to colonize other planets and for centuries humanity thrived. Then was the first contact, 400 years ago... Peace lasted for 27 years until it was found out that the aliens had found ample supply of material called Calcae-10 that was needed to create effective fusion generators. For the aliens it was a sacred mineral while humanity had run out of their own supply. This caused the humanity to wage war for the rare commodity. While the initial assault was successful the ensuing war has now continued till this day. Now, humanity is losing the long war. On the last planet, as a last resort, humanity has started a project to go beyond known space to escape the wrath of the aliens. Humanity will endure!

Fly through the trippy tunnels, avoiding obstacles and getting as far as you can!

Familiar place, but still so different and confusing. Even my own brother won't recognize me. What's going on? I need to keep moving...

We Love You Too

You must participate in your fifth gm(48)
Artwork by
sushiPop

You must reach level 10
Artwork by
Kwisarts

You must reach level 1
Artwork by
Kwisarts

We Need Your Vote

You must reach level 25
Artwork by
Kwisarts

You must place in the top three
Artwork by
thirteen

You must reach level 42
Artwork by
Kwisarts

You must win the gm(48)
Artwork by
thirteen

These achievements feature beautiful artwork from our community. A big thank you goes out to the artists for their contribution.