Move across an endless randomly generated board, Making choices and engaging in rock-paper-scissors card battles, all while managing your health and tiredness meters.

HOW TO PLAY
Upon starting the game, a new run will begin. Something to note is that the game is endless, and does not have a specific win condition. Simply try and go as far as you can!

THE OVERWORLD
You will begin in the overworld, on a new randomly generated board. 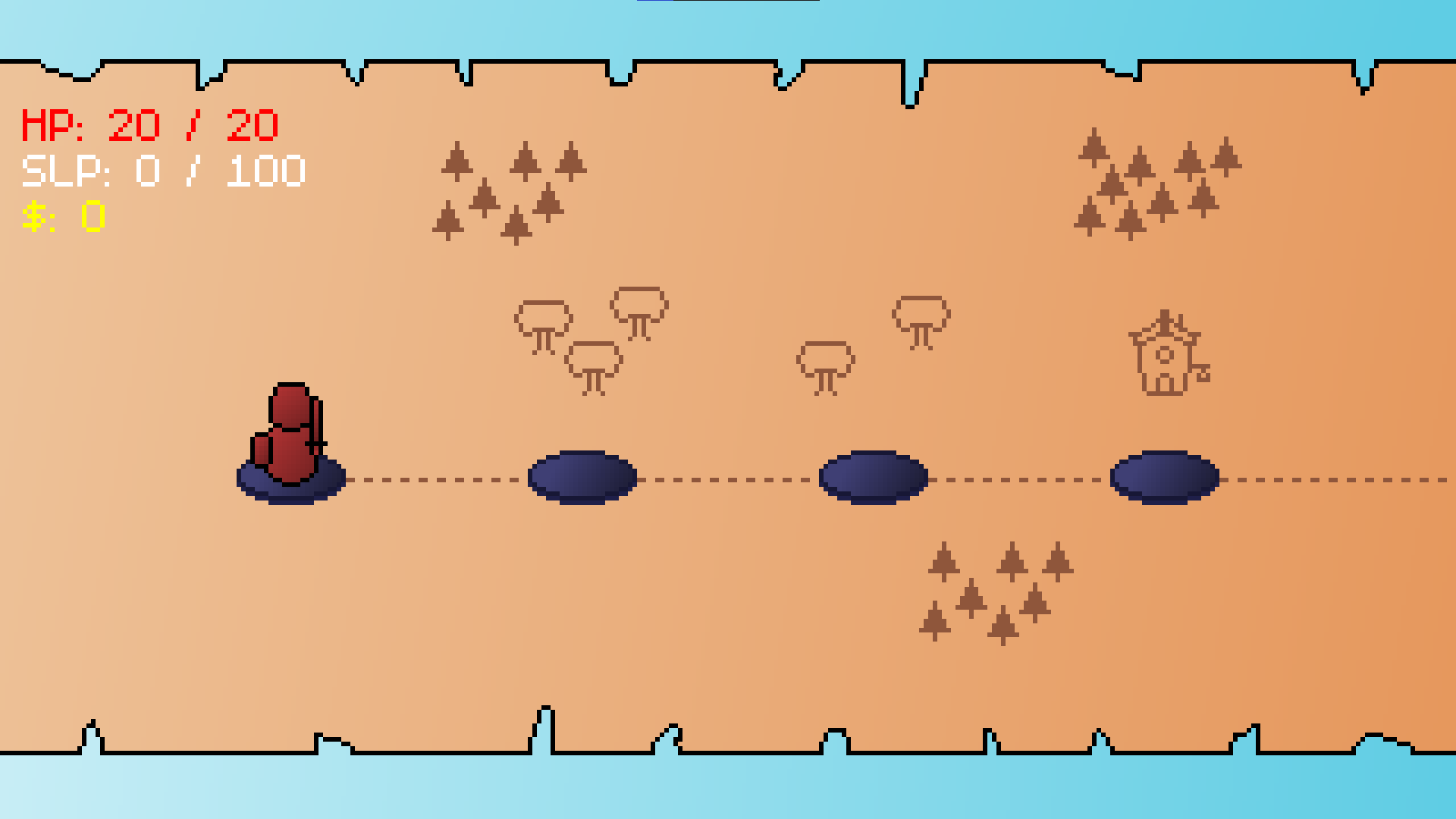 Make note of the different stats shown at the top left corner. Health - Don't let it fall to 0! Stay at inns to heal. SLP - Sleepiness. if it gets to 100 you will be forced to take quite an uncomfortable nap. Stay at inns to restore it. $ - Money. Important as it is needed to stay at Inns, the only way of healing and fully restoring your sleepiness.
Use the arrow keys to move across the overworld. (But remember, no backtracking!) You may encounter different points of interest during your travels. These will pop up a text box telling you what they do, and ask if you would like to use them. Every time you move you have a chance of encountering an enemy! These encounters will take you to the battle board, where you face off in a rock-paper-scissors-card battle!
BATTLES
Upon the start of a battle, you will be send to the battle board. 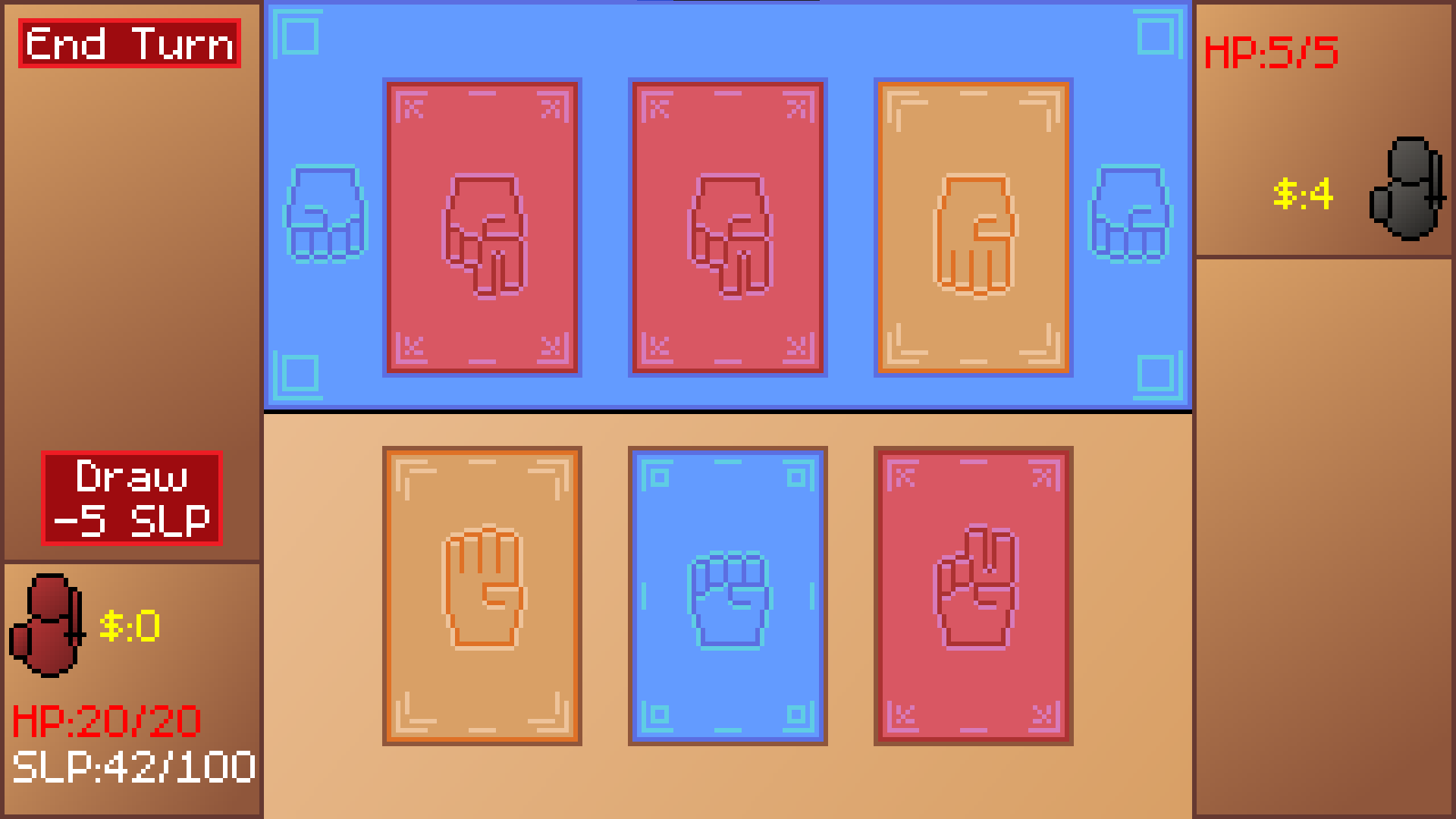 The board has two sides, one for you and one for the enemy. Each side has 3 rows, where cards can be placed. At the start of the battle, you are both given 3 cards on your side of the board. To win the battle, cards must be used to attack empty rows to damage your opponent. The battle starts as your turn. ATTACKING To attack an enemy card, click on one of yours to select it, then click on an opposing card, or vacant card space to directly attack the enemy. Attacking with a card destroys it. Following the rock-paper-scissors format, attacks can be super effective or ineffective.
-Super effective attacks. - destroy the opposing card and hit the enemy for bonus damage. -Regular attacks (duplicates). - destroys the opposing card. -ineffective. - does nothing but destroy the attacking card.
As cards are used up when attacking, you will need to draw more cards. Press the DRAW button on the right to add cards to your draw pile. 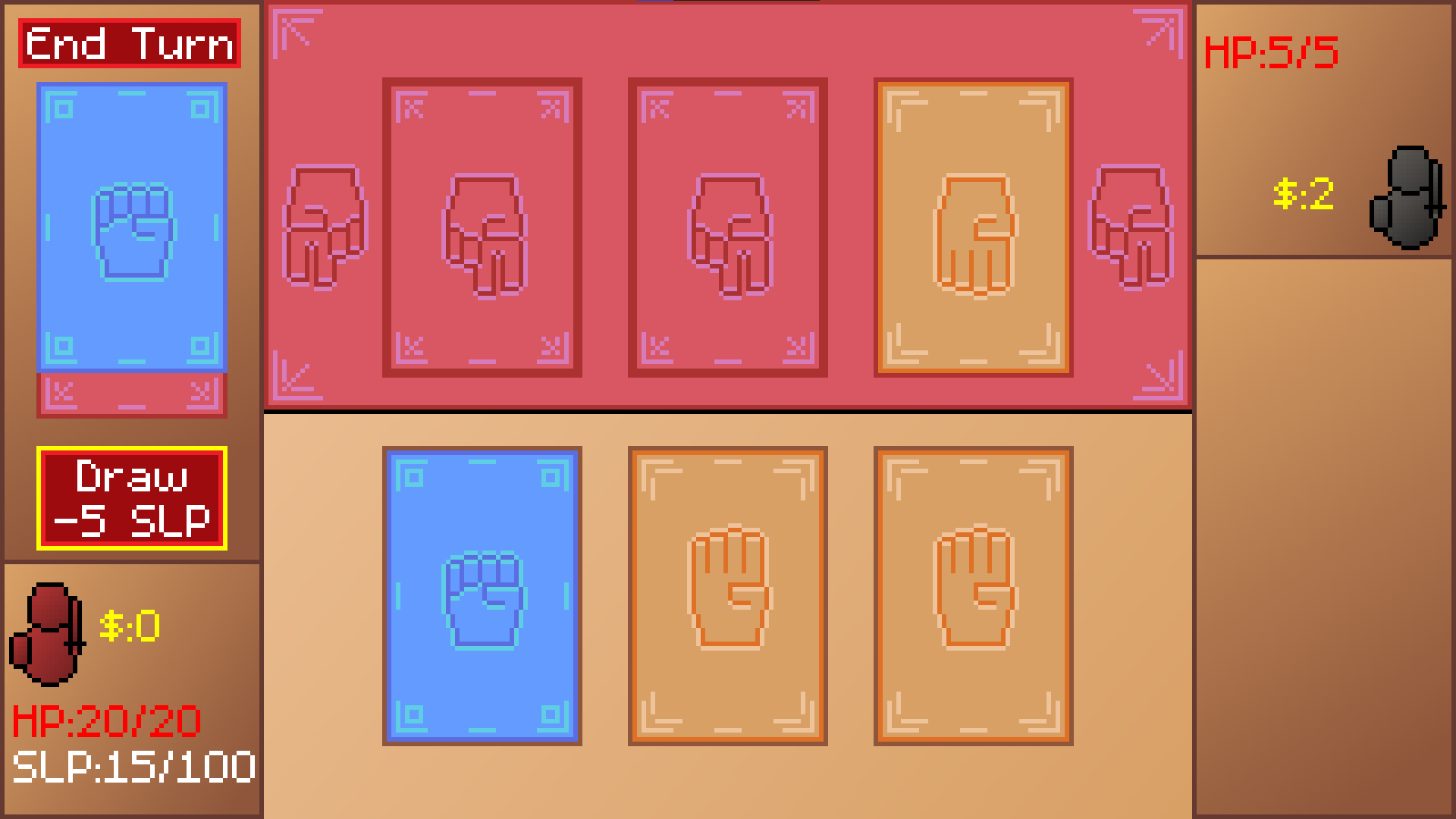 Drawing cards has a price however, as each draw costs 5 SLP. Be careful to only draw what you need to win! Clicking on cards in the draw pile then clicking on an empty space on your board allows you to place them. Note that placed cards cannot be used until the next turn.
After you are done, press the END TURN button. The enemy will then have their turn. This cycle will repeat until you win or your HP hits 0. Like cards, enimies have types too. The color and sign on their side of the board shows what attacks they resist and are weak to.

KNOWN BUGS ahem- i mean uh- features!
-You can enter caves and dungeons multiple times. (not super unbalenced since you need to win the fight to get the money.) -Sometimes opponents stack cards when placing new ones. (no idea what effect this has on gameplay i just saw it happen a few times.)
Thats all you need to know about Side Quest! Happy questing!

Move across a randomly generated board, Making choices (with side effects!) and engaging in rock-paper-scissors card battles.